The Man Who Lost His Hair This story starts with a man called Babur. He was a very smart and patient man and everybody loved him a lot. One day, Babur along with his friend Mathur went to the nearby supermarket. After buying everything on his list, Babur saw a special shampoo, that he liked a lot but didn’t read the instructions before buying it. After buying the items, he and Mathur thought of getting a haircut.
So, they went to the barber and got a cut.
Babur-“I will use my new shampoo this time.”
Mathur- Don’t you think you should read the instructions before using it on your hair?” ( He said in a nervous tone.)
Babur-“Nobody reads the instructions these days Mathur, just relax.”

The Frightening Loss of Hair-
After returning home, Babur carefully unwrapped the plastic packaging on the bottle of shampoo and applied it to his hair, he scrubbed his hair and got a wash. The following day, when Babur woke up, he noticed something strange,
when he touched his head, instead of hair he felt his bald scalp, and when he looked in the mirror, he saw that he was bald!

Then Babur in fright rushed to the bottle of shampoo and read the instructions, it clearly said that it was for losing hair!
Babur-“How could I be so careless? People know me for my excellence, not foolishness! I must call Mathur.”
Then Babur, on the phone explained the whole story to Mathur, when Mathur arrived at his house in worry, he burst out laughing when he saw Babur’s head!
Babur-“It’s not that funny, you know!”
Mathur-“Forgive me my friend, but I just can’t stop laughing at your bald head!”
Mathur-“By the way, how did you lose your hair?”
Babur-“I forgot to read the instructions.” (He said ashamed of himself.)
Mathur-“I do know a great sage who lives in Goa, I heard he can perform miracles, but you have to go to him.” (He said with a chuckle)

The Sage of Goa-
Babur agreed, and booked the plane tickets, after he reached, he could feel the hot and humid climate and sunlight touch his skin. On the way, he asked a local about the sage and went to the seashore. When he reached, he saw a man with sunglasses, he had quite a lot of rings, lockets and was wearing a shirt with a tropical print on it.
Babur explained to the sage, what had happened and the sage replied-
Sage-“There is only one solution for this, you need to wait.”
Babur-“But that would take a long time, I want my hair back now!”
Sage-“Okay then, plant this in your garden (He took out a small bottle with a cork, and inside it was a seed.) and your hair will grow back.” Then Babur happily went back to his house and planted the seed with Mathur, the next morning his hair had grown and so did the plant! But not that kind of growth, it grew about 8 feet tall!

The End of Babur’s Hair-
Babur called Mathur and told him the situation he was in, Mathur suggested cutting the plant, and Babur took the knife and cut the plant to the bottom. After that was done Babur felt a little relaxed and went to the supermarket, but while walking over there, he realized that his hair was gradually falling off! Babur, in shame, ran home while everybody was laughing at him.
Mathur-“I think we don’t have any option, we should wait till your hair should grow back.”
Babur agreed and waited for almost three months!
By then his hair grew back in proper shape and never made mistakes like this in his life!
The End!!

Previous Do we Play with Mobile or Mobile Plays with Us
Next Teacher O, Teacher 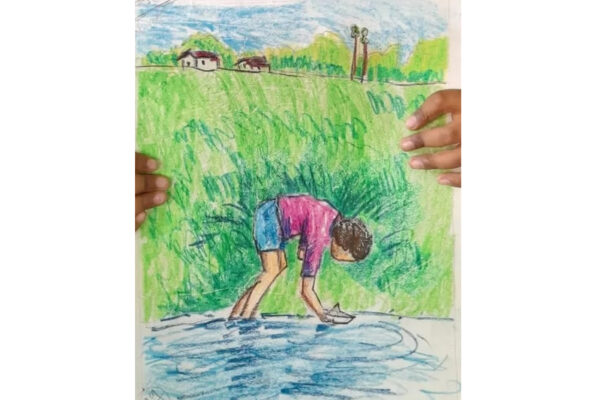