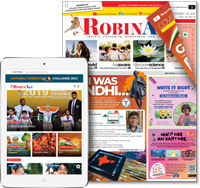 Previous Gone With the Rain!
Next Google’s Initiative for Indian Start-ups